This week for phonics we are continuing with rhyming words. We will be looking at a rhyming book called 'Oi Frog' by Kes Gray & Jim Field. Listen to the story a few times and once your child is familiar with it pause just before you say the rhyming word to see if they can shout it out, anything will go! Ask your child if they can find an object that rhymes with something from the book.

Come and join Miss Hirst in the rhyming game called ''Silly Soup''. All you need is a spoon and bowl. 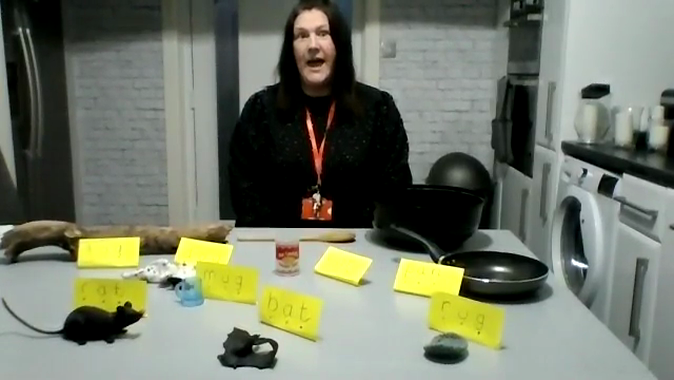 I hope you had fun joining in with the silly soup game. Maybe you would like to play' Silly Soup' at home. All you need is a large bowl, spoon and a set of rhyming pictures eg box/fox, hen/ten or objects.

Before playing discuss with your child that these words all rhyme (they have the same end sounds, they sound similar).

Silly Soup rhyme (to the tune Pop goes the Weasel)

we're going to cook it in the fridge, to make it nice and chilly!

Repeat the words throughout the activity. This enables your child to hear the words and how they have a similar sound pattern.