This week in English writing, we will be looking at a non-fiction explanation text, called The Water Cycle.

LO: To discuss models of writing (explanation texts) and ask questions to improve understanding of a text 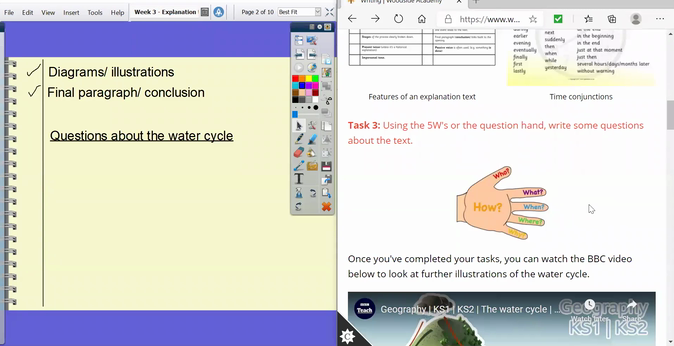 An explanation text is a piece of non-fiction writing explaining an action, process or event in a detailed but simple way. It features numbered points, conjunctions, pictures/ diagrams, labels and captions to help the reader understand the process of what’s being delivered. 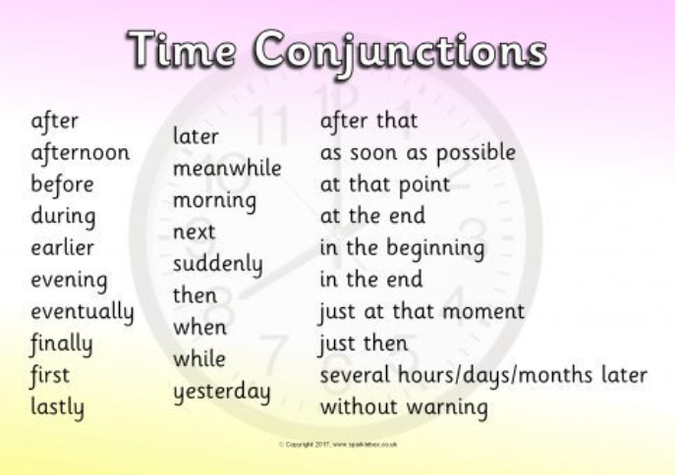 Task 3: Using the 5W's or the question hand, write some questions about the text.

Once you've completed your tasks, you can watch the BBC video below to look at further illustrations of the water cycle.

LO: To retrieve and record information from an explanation text 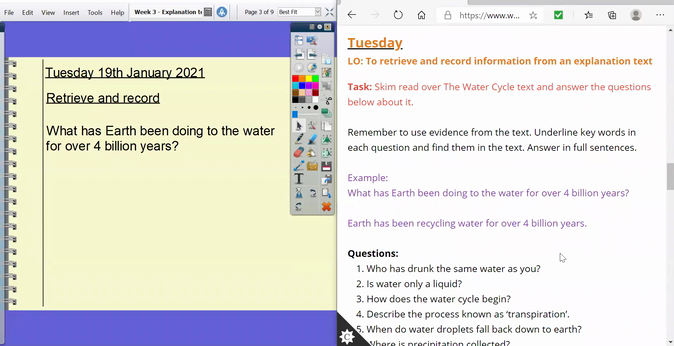 Task: Skim read over The Water Cycle text and answer the questions below about it.

Remember to use evidence from the text. Underline key words in each question and find them in the text. Answer in full sentences.

What has Earth been doing to the water for over 4 billion years?

Earth has been recycling water for over 4 billion years. 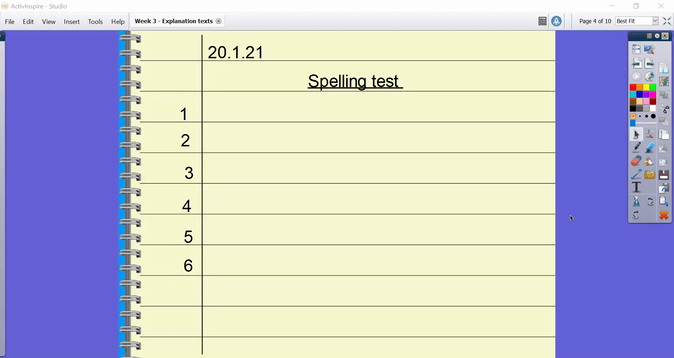 Task 3: Have a go at writing a sentence using each word.

LO: To take notes from a visual stimulus 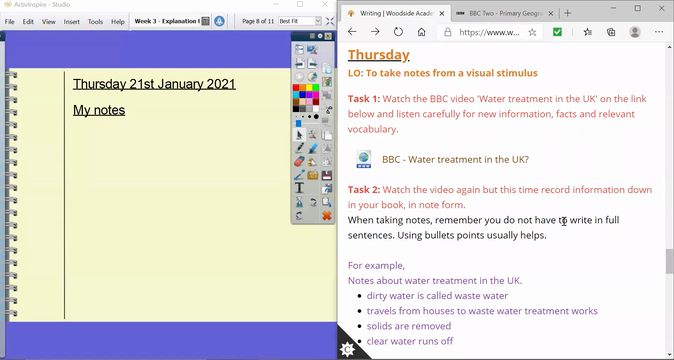 Task 1: Watch the BBC video 'Water treatment in the UK' on the link below and listen carefully for new information, facts and relevant vocabulary.

Task 2: Watch the video again but this time record information down in your book, in note form.

When taking notes, remember you do not have to write in full sentences. Using bullets points usually helps.

Notes about water treatment in the UK. 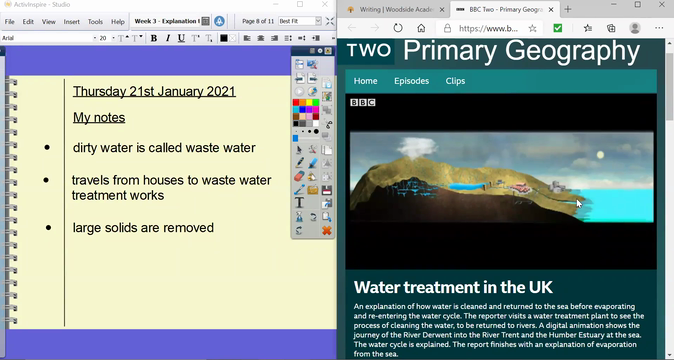 LO: To use apostrophes to mark possession

A possessive apostrophe (’) shows that something belongs to or is connected to something else.

When you want to show that something belongs to that person or thing, you add a possessive apostrophe and an s.

The singular noun is: Cat

A singular noun is a noun referring to just one person or thing.

The cat's tail was fluffy.

's shows that the tail belongs to the cat.

Top tip - You just add an apostrophe and s to the noun.

For example:  Fiona’s cat was naughty.

Task 1: Rewrite each sentence out, placing the apostrophe in the correct place to show possession.

Number 1 has been done for you as an example.

1) Davids sister painted him a picture.

David’s sister painted him a picture.

2) They went to have dinner at Marys house.

5) Andy likes to sit behind the drivers side in the car.

6) The ladys car had broken down.

7) Petes dog has been missing for two weeks.

Task 2: Rewrite these sentences so that they use a possessive apostrophe.

Number 1 has been done as an example.

1) The teddy belonging to Sarah.

2) The car belonging to Anna.

3) The house belonging to Steve and Amy.

4) A new book belonging to David.

5) The photos that belonged to Mary.

Challenge task: For each sentence below, explain the mistake before rewriting out the sentence so the possessive apostrophe is used correctly.

4) Andrew’s house is next’ door to Freddie’s.

5) Amys picture’s are hung on the wall.