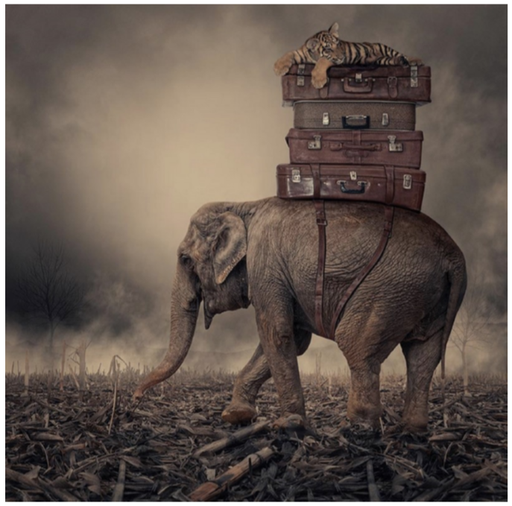 Nellie the elephant packed her trunk and said goodbye to the circus.
Performing at the circus had been Nellie’s life, but last night something terrible had happened. Hopes and dreams had been destroyed, leaving the circus in smouldering ruins. Nellie’s friends had all fled in a dozen different directions to escape the terrible flames.
Exhausted and drained, lonely and afraid, Nellie plodded over the scorched, broken ground as she was forced to forge a new future for herself.
Anxiously staring far into the distance, Nellie could make out a glimmer of glorious green: land that was unspoilt by flames. This glimmer of green represented a glimmer of hope. Nellie began to feel better. Maybe there was hope after all…

These sentences are ‘sick’ and need your help to get better. Can you help?

Help them by adding more information to them. You can include adjectives, prepositional phrases, a range of punctuation (. , ! ? ""), conjunctions (if, when, although, because) and any other thing that will make them better.

Finish off the story

Think about what happens next in the story. Can you continue this story about Nellie the Elephant?

Can you draw what the circus was like that Nellie performed in?
Or maybe you could draw what happened to it...